Spiders are creepy crawling nuisance pests that are certainly not welcomed in our homes. However, when you get to know the facts, habits, and web designs of various spiders, you may just find them fascinating. Either way, they cannot share a home with you. To discover whether a spider could be a danger to you and your family, you would need to identify the common spiders in Texas accurately.

For our purposes here at Tom Samples Pest Control, we have created a list of the common spiders in Texas broken down into three categories.

Join the team at Tom Samples Pest Control in learning more about the many spiders in Texas. Then if you have any concerns, please give us a call for a general pest inspection.

About the Common Spiders in Texas

While it is common to fear spiders, most are harmless. Spiders are easily identifiable by their eight legs and two body segments. Without spiders, bothersome insects and pests would be far more abundant.

The spider enthusiasts at Spider ID had this to say.

“Spiders found in Texas include 88 unique species from confirmed sightings by contributing members of Spider ID. It is important to remember that spiders seen in Texas are not bound by the territorial lines decided on by humans, therefore their distribution is subject to change. Occasionally, spiders can be found well outside of their known range due to being intentionally or accidentally transported by humans in cars, luggage, and other belongings.”

As with any wild animal or insect, the areas in which they live can change due to deforestation, development, and travel. Tom Samples Pest Control wants clients to know a bit about the more common spiders in Texas.

The Dangers of Common Spiders in Texas

The simple truth is that spiders enjoy the shelter and comfort of your home just like you do. Obviously, though, homeowners do not enjoy sharing their homes with spiders, even if they like seeing the intricate designs of their webs outdoors.

Spiders only bite humans when provokes or threatened. And let’s face it, we are massive compared to even the largest of spiders. The slightest movement in their area may be perceived by the spider and threatening. Therefore, it is a good idea to call for exclusion and extermination when you see a web of spiders lurking around your home.

While all spiders have a pair of poison glands, not all spider venom is harmful to humans. Generally, spider bites leave behind some swelling and redness but no other symptoms. There are, however, two poisonous spiders in Texas that you should be aware of. They are the recluse and the black widow.

Texas is home to five species of the recluse. They have a distinguishing fiddle-shaped marking in dark brown on their backs. They can reach 1/3 of an inch and are nocturnal. They live in dark and secluded places like woodpiles, sheds, garages, and closets.

Their bites cause intense pain and tissue damage in humans. Additionally, those affected worse may feel severe nausea, chills, fever, and pain within 24 hours.

The infamous black widow spider is easily recognizable by its black body and reddish-orange marking. This hourglass-shaped mark is present on the bottom side of the abdomen. Female widows are generally around half an inch long, while the males are about a quarter of an inch long. A black widow’s egg sac can hold anywhere from 25 to a staggering 900 eggs. Females who have just completed an egg sac are most likely to bite since they are hungry after their tremendous effort.

The venom of a black widow is dangerous to humans. It is a neurotoxin that affects the central nervous system. Although the poison does pose a threat, most adults will not be harmed fatally by the bite of a black widow spider. Most people experience some amount of pain and abdominal cramping. At the same time, others report having tremors, weakness, leg cramps, sweating, nausea, vomiting, and high blood pressure. In severe cases, difficulty breathing or falling unconscious may occur.

This variety of spiders will bite when threatened but do not prove to be lethal to humans. As with all bites, some people may be allergic to the venom even though the majority have no issue. It is best to have a doctor look at the wound as soon as you can in those cases.

With a lance-shaped marking down the center of the back, these spiders are a pale beige to yellow in color and may even have some green. It only gets to about ¼ inch and is a nighttime hunter. A bite from the yellow sac spider is painful and can even damage the skin. Typically, the reaction to the bite is mild will not be a concern.

With a white stripe running down the abdomen of the parson spider, this variety looks a bit like clergy members from the 18th century. It is a medium-sized spider that is hairy and very quick. It is one of the ground spiders but don’t worry if you step on one. The venom is not lethal to humans unless you have an allergic reaction.

One of the day spiders, these spiders jump on their prey and typically live in your home gardens. They can deliver venom, but it is less dangerous than the “poisonous” spiders above. They are black or dark gray with hairy abdomens and “eyebrows.” And their legs have white bands between the segments.

Wolf spiders have an identifiable look of gray and brown on their backs with a strange marking that looks a lot like the Union Jack. They nest in the ground and can grow to over an inch in length. Some people may find themselves allergic to the venom of the wolf spider. It can prove deadly to those people, but it is rare.

In Texas, we have the type of tarantulas that are in horrors and nightmares. And yes, they are large and furry with crazy long fangs. They live under rocks and in shading areas and hunt at night. The tarantula bite will cause severe pain. But if you’re allergic, simply a brush from the tarantula’s hair may cause a significant and scary reaction. 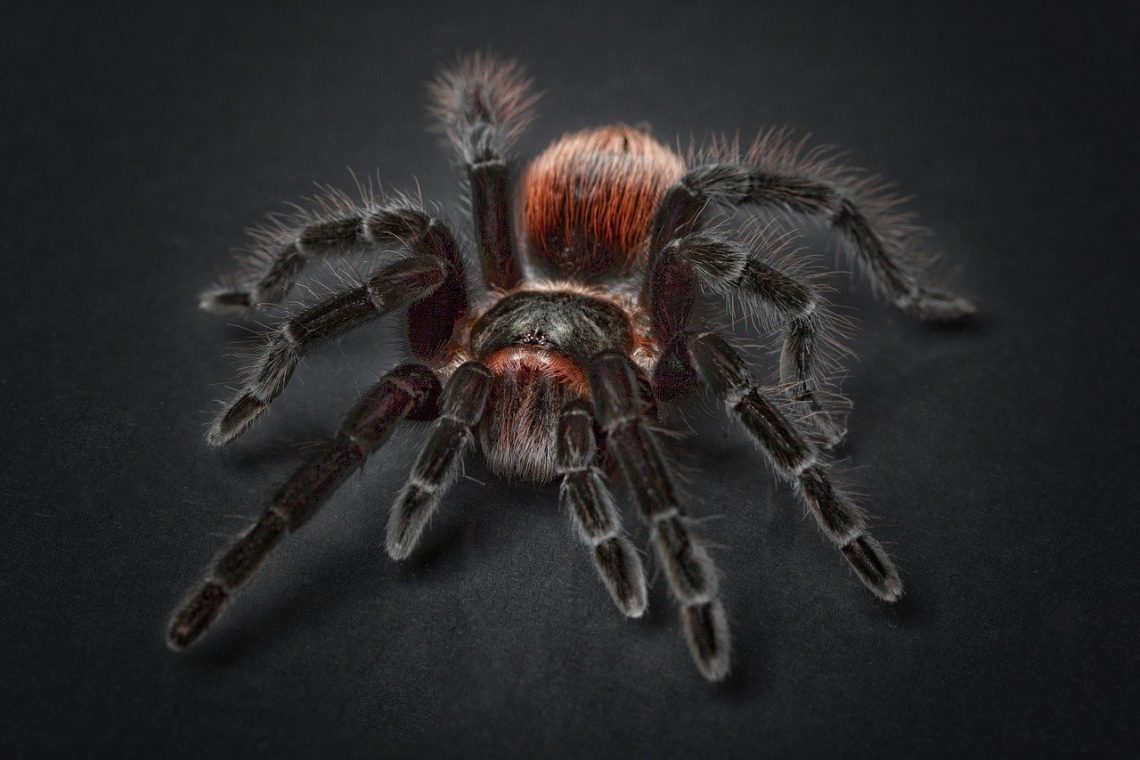 These are most likely the more familiar spiders by sight, but you may not know the names of them. What’s more, you may not know if they are dangerous or not. The spiders on this list are not venomous and don’t pose a bite threat. That said, you probably still don’t want to share your home with them.

The common spiders found in the home:

Tom Samples Alleviates the Fear of Common Spiders in Texas

If you notice a spider infestation in your home or business, we know it can be downright frightening. Also, we know your goal will be to get rid of them for good as soon as possible. Our spider control team at Tom Samples Pest Control has been helping take care of spider-related problems and alleviating the fears of our customers for more than six decades.

We are experts in tracking down spiders to the cracks and crevices they hide and exterminating them permanently. So, please give us a call as soon as you see spiders in the home or troublesome spiders on your property.

Contact us today for your pest control inspection and meet the team at Tom Samples Pest Control.